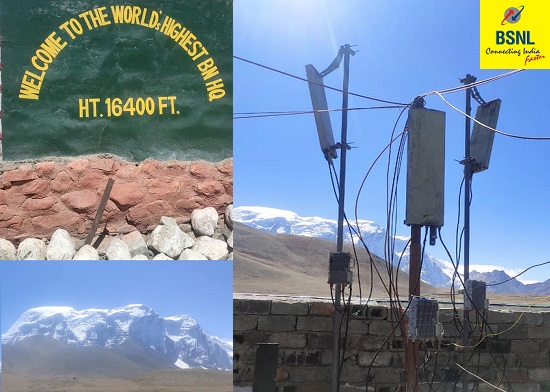 #BSNL is proud of commissioning the BTS site at Bankar, Sikkim, the highest altitude post of the Indian Army. We are committed towards the nation & it’s people.

#BSNL is proud of commissioning the BTS site at Bankar, Sikkim, the highest altitude post of the Indian Army. We are committed towards the nation & it’s people. pic.twitter.com/sEA8fe1dgs

As we reported earlier, DoT has made telecom services of state run telecom operators – BSNL & MTNL mandatory for all central government departments, ministries, CPSEs and Autonomous Bodies. Now in another letter addressed to Chief Secretaries of all State Governments, DoT has instructed to utilize the telecom facilities and services offered by BSNL and MTNL by all departments / agencies / PSUs of the State Government for internet, broadband, landline and leased line requirements.

As we all know, Central Government has decided to revive both BSNL and MTNL since these two telecom companies are considered to as strategic assets of India. BSNL/MTNL are providing connectivity needs in nook and corner of the country even in highly difficult terrains. Communication needs of our Armed Forced / Paramilitary Forces are also met by these two PSUs with utmost care and importance. BSNL is also providing Global Satellite Phone Service (GSPS) to our disaster recovery teams and security forces at the time of national calamities / floods / landslides etc.

Recently, BSNL succeeded in raising Rs 8500 Crore via sovereign bonds guaranteed by Government of India. BSNL CMD assured that, the amount realized through sovereign bonds will be used for Debt Re-financing and meeting the CAPEX requirement of BSNL. The raising of Government Guaranteed Bonds of Rs 8500 Crores is also a part of the Cabinet approval of BSNL Revival package

Dear readers, please share your views and opinions about BSNL Services via comments with us. How many of you believe that, existence of BSNL is essential for ensuring stability in Indian telecom market?