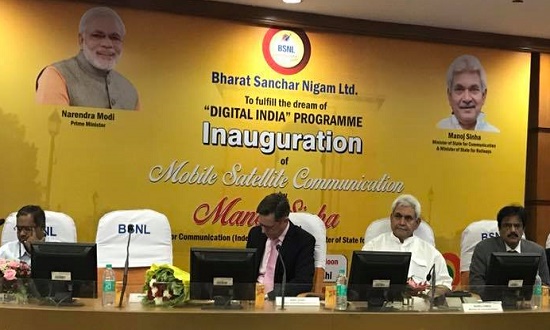 Launching the service, Telecom Minister Manoj Sinha said -“Agencies handling disasters, state police, railways, Border Security Force and other government agencies will be given the phones in the first phase. Later people while travelling in flight and on ships will be able to use BSNL’s Satellite Mobile phone service.”

BSNL Chairman and Managing Director Shri. Anupam Shrivastava said – “This is an exciting day for BSNL as it brings reliable, secure voice communications, powered by Inmarsat’s fourth generation satellite network, within the reach of groups and communities in areas with little or no connectivity. This is an important step forward in achieving the goals of Digital India, and ensuring that connectivity is available to all.“

INMARSAT India Managing Director Gautam Sharma said – “With BSNL as the prime driver of Inmarsat’s GSPS business in India, access to satellite phone communications will be both simplified and seamless for users throughout the country. All the connections will be transferred to BSNL. The call rates will be determined by BSNL. It should be in the range of Rs 30-35 per minute.”

A satphone enables a subscriber to communicate from any point, irrespective of location, through a hand-held terminal. Satellite phone services are very much helpful in disaster situations and where there is no cellular / landline network. With BSNL satellite phone services, you can communicate from any where in the world. The combination of Inmarsat’s world leading satellite communications capabilities and BSNL’s strong telecommunications infrastructure will see the market for satphone services grow significantly.