BSNL commissioned a new 3G mobile tower @ 11,500 feet on the Indo-China border to the Indian Army 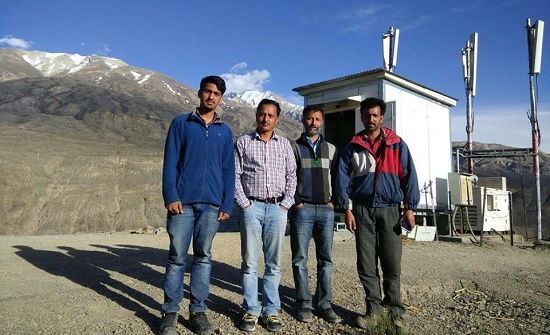 Soldiers posted along the Indo-China border in Sumdo area of tribal Lahaul-Spiti district in Himachal Pradesh can now enjoy the high speed internet facility at the most affordable tariff. Although the 3G signal has been provided to the defence forces, even the residents of nearby villages of Hurling, Gue, Chandigarh, Shalkhar will gain from the 3G signal.
BSNL’s transmission team has worked with Army at Pooh and Sumdo for the building of media from Pooh to Sumdo and done OFC jointing work at many places which was damaged due to falling rocks and road widening work. To extend the 3G services at Sumdo, BSNL has extend the transmission media from Reckong Peo in Kinnaur to Sumdo – a distance of 150 kms.

Shri. M C Singh, BSNL, GM (Mobile), said – “3G BTS has been commissioned at Sumdo and is dedicated to the Army near China border. This 150 km stretch is the most difficult area to extend the transmission media for communication services where human casualties (civilian and forces posted in area) are frequent due to frequent rock fall in this area.”

Read More: BSNL has set up the first mobile tower in DRASS – ‘the 2nd coldest inhibited place on Earth’ at a height of 11,000 feet above sea level

Dear readers, please share your viwes and opinions about this excellent service provided by BSNL via comments with us.
Share. Facebook Twitter WhatsApp Telegram
Previous ArticleBSNL to launch exclusive mobile wallet to its customers in association with MobiKwik
Next Article BSNL E-Auction of Fancy / Vanity Mobile Numbers : May 2017 (from 20-05-2017 to 26-05-2017)