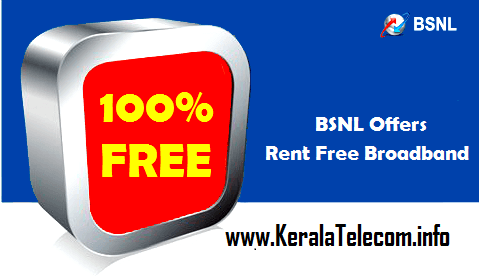 As we reported earlier, the PSU initially launched this scheme in March 2016 in an attempt to grab broadband customers of private broadband operators and cable TV operators.  Later, the scheme was extended up to 30th September 2016. Now, based on the encouraging response from field units, BSNL authorities has decided to extend this promotional offer for a period up to 31st December 2016 in all the circles.
Promotional scheme in all the Circles to those customers who are migrating from any private Broadband operator to BSNL (From 01-10-2016 to 31-12-2016)

Read More: BSNL extended Wi-Fi Modem offers for broadband customers up to 31st December 2016 in all the circles

All other terms and conditions shall remain the same.  The above instructions are effective with effect from 01-10-2016 for a promotional period up to 31-12-2016 in all the circles.


See the latest Unlimited and Limited Usage Broadband Internet plans from BSNL below:


Dear readers, please share your views and opinions about this latest promotional offer from BSNL via comments with us.
Share. Facebook Twitter WhatsApp Telegram
Previous ArticleBSNL extended Wi-Fi Modem offers for broadband customers up to 31st December 2016 in all the circles
Next Article On completing 16 years of service, BSNL introduces promotional 3G Data pack @ Rs 16 offers 60 MB data for 30 days from 7th October 2016