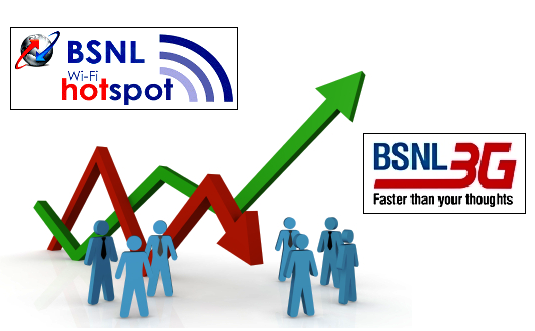 BSNL CMD said – “As per unaudited figures, we are hoping to cross revenue of Rs 30,000 crore in the year ended on March 31, 2016 that includes mobile, landline and enterprise business. This is going to be 3-4% higher than last year. We have also been able to bridge the Rs 150 crore gap on account of free roaming services. Debt to equity ratio is 0.13% which is lowest in the industry.”

BSNL has installed 24,000 Mobile Towers in last two years and it is now going to add another 21,000 in the next one year to improve coverage and quality of service. BSNL was able to achieve an outstanding mobile data growth of 92 percent in the previous financial year (FY 2014-15) registering a revenue of Rs 1,380 crore from Mobile Data Services.

To increase its data carrying capability, BSNL has focused on Wi-Fi Hotspots (4G Hotspots) in a big way. The PSU had installed 2504 WiFi Hotspots till date which includes major tourist locations across the country.

“We realised that BSNL does not have 4G spectrum and at the same time we don’t want to miss the data bus. We decided to exploit potential and Wi-Fi has become an obvious choice to join the mobile network. Other than broadband, it will also work as 4G hotspots. These hotspots work on free Wi-Fi zones while the cost of spectrum is also rising,” – BSNL CMD added.