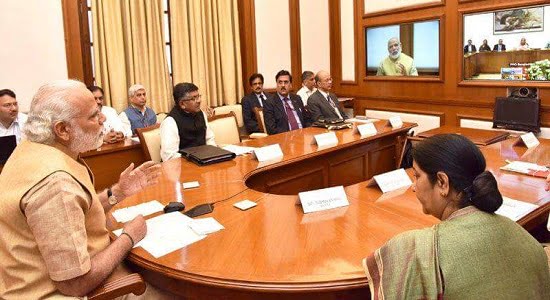 Narendra Modi said – “In this age of interdependence, the two countries would further strengthen its ties and it is a significant day that both are promoting the ways of development. Now India and Bangladesh is connected through water, surface communication and air. We want to be connected with Bangladesh though space also.“

As we reported earlier, Telecom Minister Shri. Ravi Shankar Prasad laid the foundation stone for International Gateway during a programme in Agartala last year. Prime Minister Narendra Modi signed the bilateral agreement with Bangladesh to boost the telecom facilities in North Eastern states during his visit to Bangladesh last year.

“The relation between the countries has further consolidated through the supply of power and Internet bandwith,”  said Sheikh Hasina  Bagladesh Prime Minister

BSNL has installed international router at Agartala to receive the international internet bandwidth from Bangladesh. Initially, BSNL will get 10 Gbps (Gigabits per second) bandwidth, which will be increased to 40 Gbps over time. The cost of the project is Rs. 1.91 crore with operational expenditure annually to the tune of around Rs. 7.2 crore. A 22 kilometre optical fibre cable link was laid from Brahmanbaria to Akhaura boarder to transport the bandwidth.

The bandwidth export deal is of high importance to improve BSNL service quality in North – Ease area (NE states). In addition to north eastern states, the other parts of the country would also be benefited by the new International Gateway at Agartala.