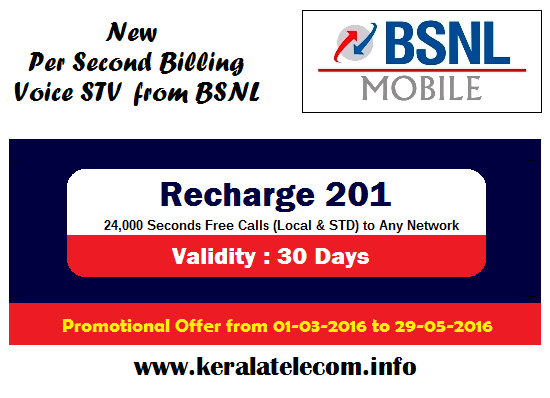 However, this new Voice STV 201 was not implemented in Kerala Circle on 25th February. As per the latest information, BSNL Kerala Telecom Circle has taken special permission from Corporate Office to launch the new Voice STV 201 with increased validity of 30 days instead of 28 Days. The new Voice STV 201 will be available for a promotional period of 90 days from 01-03-2016 to 29-05-2016 for all BSNL prepaid mobile customers of Kerala Circle.
BSNL’s New Voce STV 201 for Kerala Circle from 01-03-2016 to 29-05-2016 with increased validity of 30 days
Customers currently enrolled in any of the existing Prepaid Mobile Plans may subscribe to the newly announced Voice STV 201. The new STV is really a value for money offer from BSNL as its pulse rate is in seconds. Moreover, customers may also use the 24,000 FREE seconds to make outgoing calls (both Local and STD) to Any Number in India with increased validity of 30 days.
Read More: BSNL extended Full Talk Time and Extra Talk Time Offers up to 25th May 2016 for all prepaid mobile customers