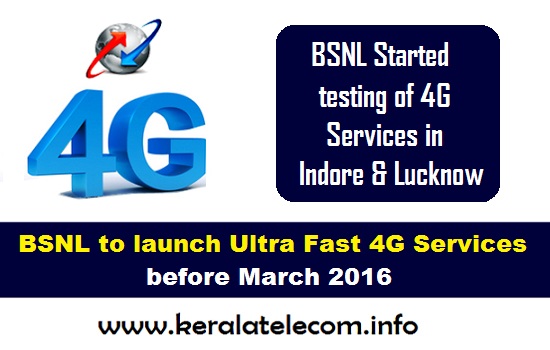 BSNL will be launching 4G Wireless Broadband Services in 2.6 GHz spectrum with Gemini Communications as the system integrator . BSNL is presently conducting 4G proof of concept (PoC) in Indore and Lucknow and once PoC is successful, the services will be launched commercially before March 2016.
BSNL has surrendered 4G license (WiMax Spectrum) in six circles – Gujarat, Maharashtra, Andhra Pradesh, Karnataka, Tamil Nadu and Kolkata. As per the latest information, BSNL will be launching 4G services in the remaining 14 telecom circles.

In the first phase, BSNL is planning to pick up
capital city and the second populous city from all states for 4G
deployment.

The expression of interest (EoI) will lay the ground rules for deployment of 4G services in 25 cities based on revenue sharing model or outright purchase of equipment. It is still not clear which model BSNL is opting for 4G services deployment in 25 cities.

Dear readers, please share your views and opinions about this latest news about the launch of 4G Services by BSNL via comments with us.
Share. Facebook Twitter WhatsApp Telegram
Previous ArticleBSNL is installing 25,000 more towers to improve the quality of service whereas private mobile companies are not improving services : Telecom Minister Ravi Shankar Prasad
Next Article Increase in Service tax due to Swachh Bharat Cess: BSNL revised EVDO and CDMA Prepaid STVs across all telecom circles with immediate effect