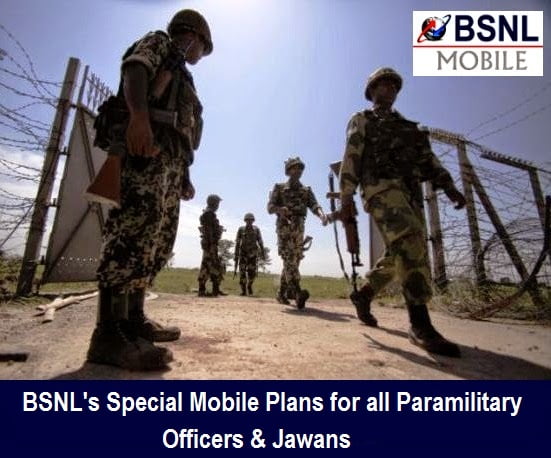 BSNL Special Postpaid Plan – ‘Rakshak’ – for all Paramilitary Forces
Under this plan special plan – Rakshak, two SIMs [Main SIM & Home SIM] will be issued/activated from the same BSNL Customer Service Center of the circle and bill payments can be made in the home circle.

Fixed Monthly Charges of Rs 299/- is the total fixed monthly charges for two postpaid connections. All tariffs applicable for main number, except incoming call while roaming, will be the same for home number.
BSNL ‘Special Postpaid Plan for Officers’ of all Paramilitary Forces

The credential of the Paramilitary Officer / Jawan has to be verified before activating the plans by taking a photocopy of his Identity Card issued duly attested by his controlling officer. A self certificate indicating that no other connection is active in his name under this special plan any where in India is also to be taken. Service Tax as applicable will be charged extra.

The above plan may be allowed for activation through BSNL Customer Service Centers only.

Dear readers, please share your views and opinions about this Special Mobile Plans for Paramilitary Officers & Jawans by BSNL via comments with us.