State owned BSNL – the only operator who provided uninterrupted telecom services during Chennai Flood; proved to be the most dependable operator in India

By Tele Kerala (Chief Editor)December 5, 2015Updated:August 30, 202120 Comments2 Mins Read
Facebook Twitter WhatsApp Telegram
Share
Facebook Twitter WhatsApp Telegram
The recent Flood in Chennai has revealed that, national telecom backbone Bharat Sanchar Nigam Limited (BSNL) is the most dependable operator in India. Out of the nine mobile network that exist in Chennai, the only One operator – the state owned BSNL was functional during the floods. 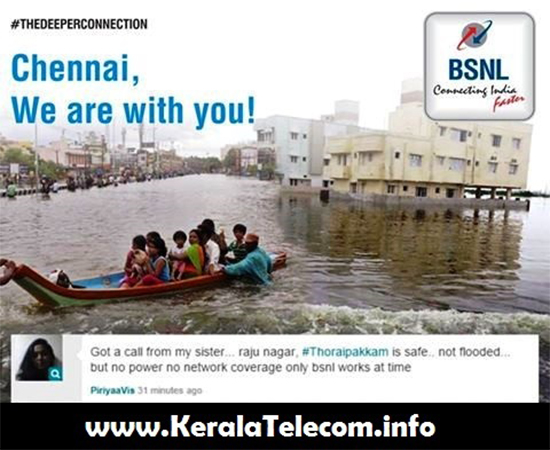 As per reports, more than 80 percent of BSNL Mobile and Landline Network was operational during the Chennai Flood. Unlike other private mobile operators, BSNL once again proved that it is not the company, which only talks about profits. It is the only telecom company with social commitment on top of its charts.
While the mobile network of all private operators collapsed, BSNL was able to maintain its mobile network at very heavy extra operational cost. BSNL – the state run PSU – has provided telecom services to the people of Chennai at a time when it was really needed. More than 48 percent of BSNL Mobile Towers in Chennai were continuously running on diesel engine. This itself shows the real social commitment of BSNL.

As we reported earlier, to facilitate relief operations during this natural calamity and to extend the real helping hand to the stranded people of Chennai, BSNL offered Free calls, Free SMS and Free Data packages for Mobile and Landline customers for a period of seven days with effect from 02-12-2015.

Many of our readers informed us about this great service offered by BSNL at a time when the network of all other private operators vanished.  As per the latest reports from Chennai, Only BSNL Mobile Numbers were reachable during the disaster period. Some of the recent Facebook posts by the residents of Chennai will give the exact picture. 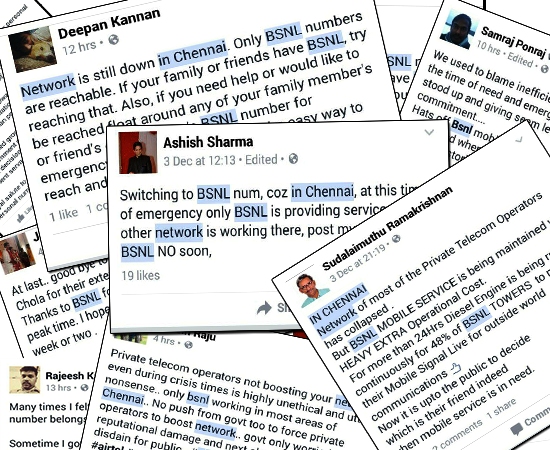