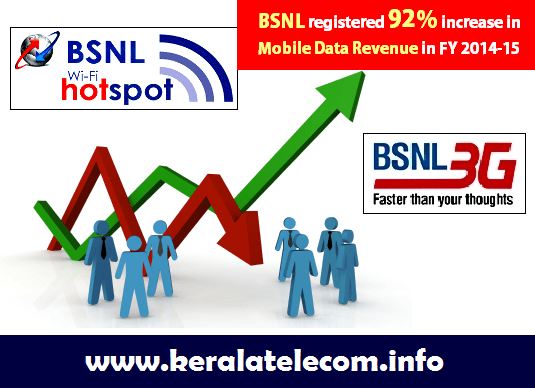 The revenue from Mobile Data services was Rs 720 crore in FY 2013-14. Anupam Shrivastava, CMD, BSNL said, “We have missed on voice bus but we do not want to miss on the data bus. For any company data is the key and we are increasing data carrying capability and focusing on data centric business with main focus on Wi-Fi.“

“In the last one year, BSNL has strengthened its mobile data portfolio by focusing on Wi-Fi, strengthening its data network and core network (like OTN, MPLS and OFC), expansion of SGSN & GGSN, FTTH (Fiber to the Home) and others and this has resulted in huge jump in data revenue,” added Shrivastava.

To increase its data carrying capability, BSNL has focused on Wi-Fi, Data Center, 3G, 4G and FTTH in a big way. Till date, BSNL has installed 460 Wi-Fi hotspots in 230 cities and towns and is planning to install 2,500 Wi-Fi hotspots in FY 2015-16 to give a big fillip to data. In terms of FTTH, BSNL has done well in 45 cities though it has been laid out in 200 cities.

BSNL has also deployed six internet data centers in Gurgaon, Faridabad, Ahmedabad, Chennai, Bangalore and Pune of which Ahmedabad is a cloud data center to give a big push to data services in BSNL.


Dear readers, please share your views and opinions about this excellent performance by BSNL in revenue generation and revenue growth via comments with us.