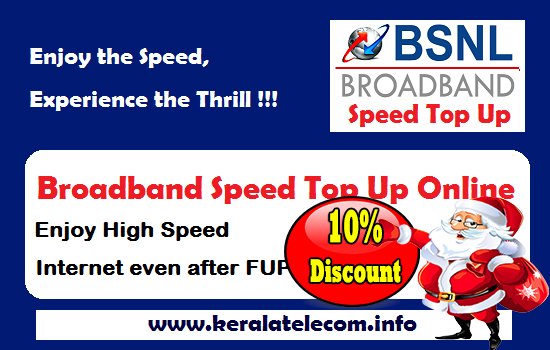 “It has been decided by the Competent Authority to launch a promotional scheme to offer 10% discount on the Speed restoration add-on plan charges during upcoming festive season ( Christmas, New Year and Republic day) in all the circles for a period up-to 31-01-2016“.


See more details about BSNL Broadband Speed Restoration / Speed Top Up Packages and the detailed procedure for activation below:

BSNL Speed Restoration / Speed Top Up packs are extremely useful for heavy data usage customers as the add-on plans are very cheap. 20 GB of high speed broadband will cost just Rs 500 only which is very cheap as compared to the monthly rental of existing broadband plans.

Dear readers, please share your views and opinions about this latest Christmas & New Year Offers by BSNL via comments with us.
Share. Facebook Twitter WhatsApp Telegram
Previous ArticleBSNL’s Special Mobile Plans with Free Calls and Free 3G/2G Data for all Paramilitary Officers and Jawans across India
Next Article BSNL launches New SMS STV which will work on Blackout Days for all Prepaid Mobile Customers on PAN India basis