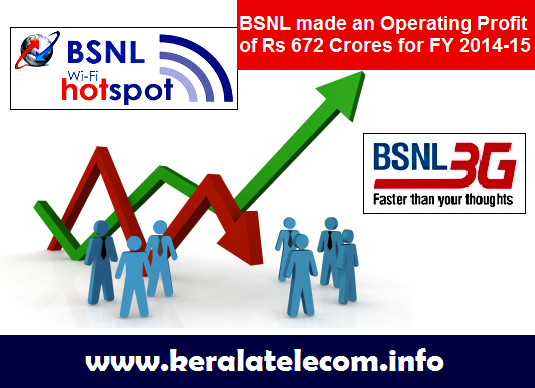 Anupam Shrivastava said – “BSNL had bad results for the last few years, but in year 2014-15, it has been able to reverse the trend. Also it is a known fact that most of the telecom majors are having heavy debt burdens but it still continues to be relatively better, showing a low debt-equity ratio”.

The debt equity ratio of BSNL is around 0.13 per cent, which is lowest in the industry. The PSU has taken various customer centric initiatives such as free night calling, free roaming and providing a minimum broadband speed of 2 Mbps.

“BSNL will be investing Rs 7,700 crore in the current financial year to expand network. The company also plans to launch 4G Wireless Broadband services on 2600 MHz band in a couple of cities by the end of March. BSNL is focussing on data. Currently 10 per cent of the revenue is coming from mobile data” – Shrivastava added.

The CMD further said BSNL has started to monetize its towers by entering into agreements with other operators and there is 42 per cent increase in tower business. A tower subsidiary will be created as the Cabinet has already cleared the proposal for that.

Dear readers, please share your views and opinions about this exciting news about the wonderful performance of BSNL via comments with us.