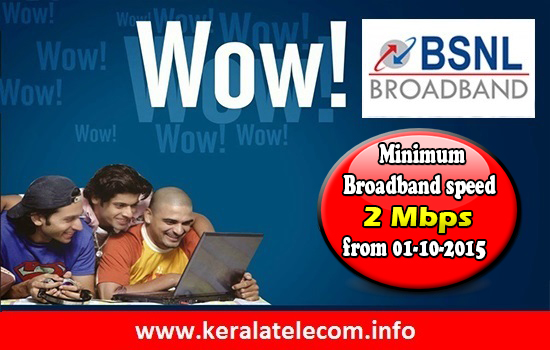 All BSNL Broadband customers may enjoy increased download speed / bandwidth from 1st October 2015 onwards as the PSU has decided to upgrade the bandwidth  across all telecom circles in India. Speed of the most popular broadband plans like BBG UL 545, BBG Combo UL 675, BBG Rural Combo UL 650 will be upgraded to 2 Mbps from 512 Kbps.
A. Upgradation of bandwidth under certain Broadband plans as follows:-

B. Upgradation of bandwidth in Tirupati, Kurnool, Anantpur, Warangal & Nellore SSAs of AP circle as follows:-

The above instructions shall be effective with effect from 01-10-2015 in all the circles. After the FUP quota of allotted free data is exhausted the speed will revert back to 512 Kbps like before.

See the existing Unlimited & Limited Broadband Plans from BSNL below:

Dear readers, please share your views and opinions about this latest bandwidth up-gradation by BSNL via comments with us.