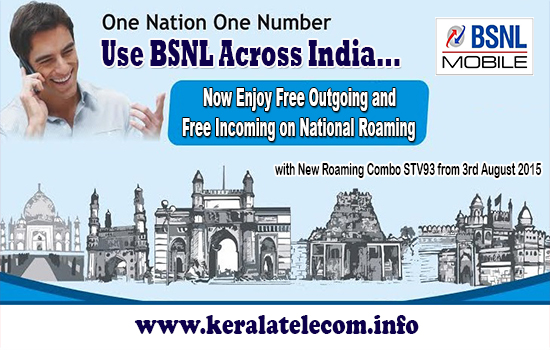 As per the latest information, the New Roaming Combo STV 93 may be activated through Flexy Recharge 93 or by sending sms – STV ROAM93 to 123. BSNL launched this new roaming offer 93 as a regular offer with effect from 03-08-2015, for all BSNL prepaid mobile customers.
However, for BSNL Prepaid Mobile Customers of other telecom circles, there will be slight change in the MRP of the New roaming STV with Free Outgoing calls and SMS2 (+ /- 2 adjustment in MRP is allowed for each telecom circle).

BSNL launched All India Free Roaming from 15th June 2015 onwards. BSNL is the only Indian operator to introduce such an exciting offer to it’s prepaid and postpaid mobile customers across India. This scheme has already made an impact among mobile users and BSNL Kerala Circle alone got around 18,000 new customers through MNP. See it’s details below:

Dear readers, please share your views and opinions about this latest STV 93 – which can be used to make Free Outgoing Calls and SMS on National Roaming – via comments with us.
Share. Facebook Twitter WhatsApp Telegram
Previous ArticleBSNL allows migration of Annual Data Plan Customers to Any other Prepaid Mobile Plan without losing Data benefits
Next Article Exclusive: BSNL to reduce validity of 3G Data STV 68 to 5 Days from 6th August 2015 onwards across India