Exclusive: BSNL to purchase bandwidth from Bangladesh, Plans to start services in South Africa by 2016 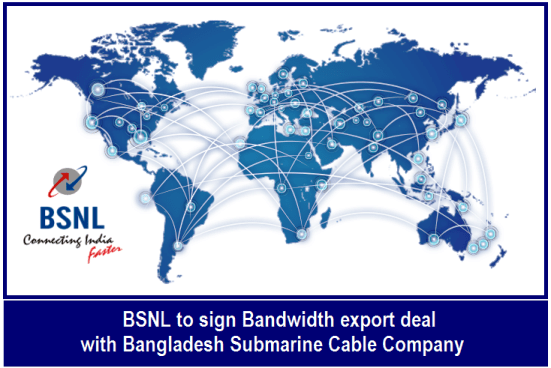 As per the latest media reports, BSNL has also plans to start services in South Africa. The state run PSU is exploring it’s business opportunities in South Africa for expansion. BSNL may acquire equity stakes or enter into an agreement or participate in bids in the overseas market.
As we reported in January 2015, the deal was supposed to be signed on 27th January 2015. BSNL wants to provide broadband internet services across North eastern states via Dhaka.

Initially, BSNL will buy 10 Gbps (Gigabits per second) bandwidth, which will be increased to 40 Gbps over time. Bangladesh Submarine Cable Company has agreed to sell its unused bandwidth to BSNL for $1.2 million a year.

As per the information from

the department of telecommunications, the agreement is likely to be signed during the visit of Prime Minister Narendra Modi to Dhaka.

Currently, BSNL provides bandwidth from West Bengal to the north-eastern states. Once optical fibre cables are laid from Agartala to Dhaka, Internet users in the northeast will have faster speeds. Once the agreement is signed, the execution will take about six months.

As per media reports, BSNL plans to start services in South Africa by 2016. BSNL has sent one of its directors to South Africa to explore business opportunities. A top BSNL executive said – “BSNL has also written to government telecom operators of BRICS (Brazil, Russia, India, China and South Africa) nations expressing interest in their telecom market.”

“We could acquire equity stakes or enter into an agreement or participate in bids in the overseas market. The talks are preliminary but foraying overseas is part of our vision document for the current financial year,” the executive added.

The official also said – “The focus is on increasing our topline in India through data services and foraying into telecom markets outside India to create additional streams of revenue. We are also eyeing consultancy projects in foreign markets.”

BSNL was earlier in the race for Ethiopian Telecommunications, a state monopoly. In 2009-10, BSNL bid for Zambia’s lone fixed-line operator Zamtel and was also in the fray to buy Luxembourg-based Millicom’s Sri Lankan mobile network. None of the deals worked out because of issues over pricing and policy. “By early next year, we will be able to finalise our strategy for an overseas foray,” the official added.