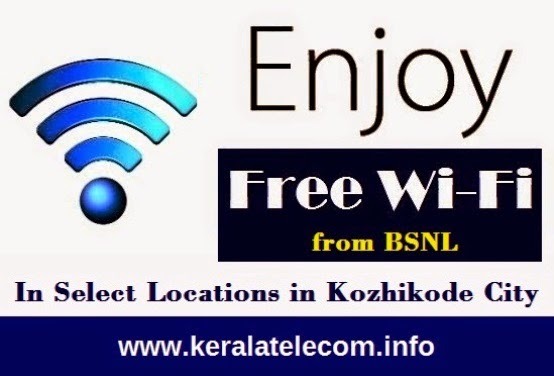 The corporation officials discussed the details regarding Public WiFi Services with BSNL officials on 28th April 2015 and decided to introduce the facility ten select locations in the city. The locations include – Kozhikode beach, Mananchira,
Medical College, Civil station, West Hill Government Engineering
College, Mavoor road, Mofussil bus stand and other busy locations in the
city.
Kozhikode Corporation has decided to introduce WiFi connectivity as part of the launch of its mobile governance (M
governance) initiative included it in the budget for the financial year
2015-2016 so that the people can get speedy access to internet.
The Corporation selected BSNL as the service provider to avoid the issues of security concern. Corporation proposed around fifteen locations in the city to carry out feasibility study to introduce the system.
During the tenure of the previous corporation council, there was a proposal to provide WiFi
access to public through the fifteen selected bus stops in its limit and the scheme was
abandoned midway after it failed to get approval from the police citing
the reason of safety concerns.
Deputy mayor of Kozhikode Corporation Shri. P T Abdul Latheef said that during the meeting, BSNL officials have mentioned around fifteen locations and that the locations will be finalized after conducting the feasibility study.
“The corporation has decided to entrust BSNL as service provider to avoid the issue of security lapse which forced us to abandon the envisaged scheme during the tenure of the previous council. The remaining process will be initiated once the forthcoming council meeting approves the proposal after discussion,” he added.
Different Categories of BSNL Free WiFi hotspot Services

Any one having a valid mobile connection (of any network) can log in using a login id and password and payment could be made either through net banking or using prepaid vouchers, to be made available to BSNL franchisees in the city.