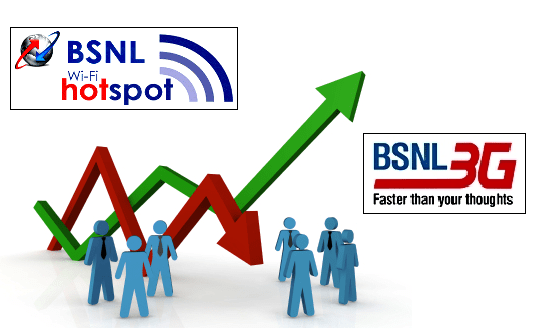 Recently, government approved the appointment of Shri.Anupam Srivastava as the new Chairman and Manging Director (CMD) of the PSU. The new CMD is very much confident about the turnaround of the company by 2017-18 with it’s data business.
From 1st May 2015 onwards, BSNL introduced Free Unlimited Calling during Night hours from it’s Landline phones across India. BSNL introduced this exciting offer because of the recent changes made by the telecom regulatory authority of India (TRAI).

In March 2015, the regulatory body came out with a new IUC (inter-connect user charge) regime, whereby the termination charges was removed for calls from any Landline Network. As per Shri. Anupam Srivastava, this was the triggering point of BSNL’s revival.

BSNL launched Mobile Services in 2002, and introduced Rs 1 per Minute tariff where all other operators were charging around Rs 20 per Minute for Mobile Calls. BSNL became the market leader in mobile service in 2006, far ahead of any private operator with a market share of 30 per cent, which is higher than the present Airtel market share of 23 per cent. BSNL was the first operator in India to make incoming calls free for mobile calls.

After 2006, BSNL was not successful in buying new equipments for expansion; there were forces acting against BSNL not permitting the PSU to procure the right equipment. Till 2012, private operators had a free hand. In short, BSNL lost it’s voice business from 2006 to 2012.

BSNL will be offering Free Public WiFi services that will compete with 4G from private operators. Since, the data transmission will happen from optical fibre, speed will be much faster than 4G.

Shri. Anupam Srivastava said – “Being India’s largest landline operator, we are better placed than private operators to roll out WiFi because you need landline cable and optical fibre. Speed will be more than 4G data speed.”

“BSNL has also plans to integrate the WiFi to the mobile network. By 2017-18, with revenues from data business and the turnaround of BSNL will be complete” , the CMD added.