Exclusive: BSNL is in discussions with MTS to offer Co-branded 4G services across India 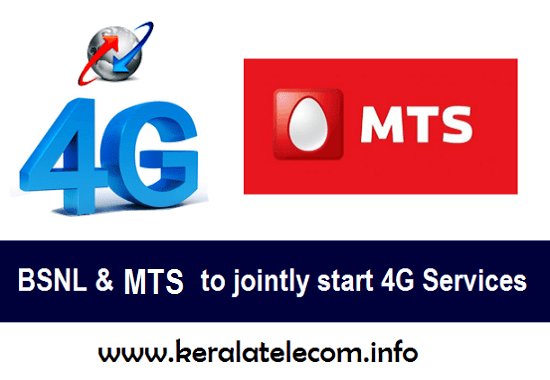 BSNL & MTS will be offering 4G services through joint branding. As per latest media reports, a senior BSNL official said – “We are in the final stages of discussions with MTS and are awaiting the government’s policy on spectrum sharing and trading, expected to be announced soon.”
Currently, MTS offers services across nine telecom circles, while BSNL offers telecom services in all except two circles – Delhi and Mumbai. Both companies sought to combine their spectrum across circles and offer ‘co-branded’ services. As per latest TRAI figures, MTS has around 10 million customers across India.

However, MTS did not respond much about this deal as the it has to be approved by government and DoT. BSNL had limited spectrum to offer
full-fledged 4G services and at least 5 MHz is required for such a
roll-out.
It is also expected that, government will soon announce the guidelines for spectrum sharing and trading.  The deal between BSNL & MTS will be subjected to the approval by DoT and government’s policy.

BSNL doesn’t have 4G spectrum and hence the PSU has plans to offer 4G services
through two alternatives: First, through Wi-Fi Hotspot Services (it has plans to integrate its
Wi-Fi to 2G and 3G networks and act as a 4G hotspot for mobile
subscribers) and second, through partnerships with private telecom
players. BSNL aims to roll out 4G
services across the country by next year.
BSNL Chairman and Managing
Director Sri. Anupam Shrivastava said – “BSNL will invest Rs 39,000 crore in the next five years,
a major chunk of it on data. The focus is on improving core network
capabilities, as we intend to exploit data.”  See it’s detailed news below:
Reliance Jio is expected to roll out 4G services by next month, Bharti Airtel, India’s largest telecom operator, has already launched these services across 23 cities.
Dear readers, whether BSNL can compete with Reliance Jio and Airtel by the proposed deal with MTS? Please share your views and opinions via comments with us.
Share. Facebook Twitter WhatsApp Telegram
Previous ArticleExclusive: Postpaid Bills & Prepaid Tariff to Cost More as Service Tax increased to 14 percent from 1st June 2015 onwards
Next Article Exclusive: All Mobile Operators except BSNL & MTNL against TRAI proposal on mobile internet activation