Exclusive: BSNL to charge local call rates for calls to Nepal for the next three days to help Earthquake Victims

By Tele Kerala (Chief Editor)April 25, 2015Updated:August 30, 2021No Comments2 Mins Read
Facebook Twitter WhatsApp Telegram
Share
Facebook Twitter WhatsApp Telegram
National Telecom backbone Bharat Sanchar Nigam Limited (BSNL) has announced that, they will be charging only local call rates for calls to earthquake-hit Nepal for the next three days. The move is aimed at enabling Indians to connect with their near and dear ones in Nepal. 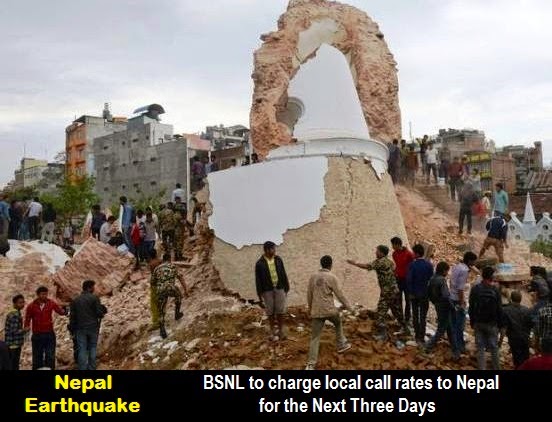 About 700 people were killed after a powerful earthquake measuring 7.9 on Richter scale struck Nepal on Saturday (25th April 2015) flattening houses and buildings including the centuries-old Dharhara tower and triggering an avalanche on Mt Everest.

A decision to cut call rates was taken following a meeting chaired by the Cabinet Secretary and with approval of Telecom Minister Ravi Shankar Prasad.

BSNL CMD Anupam Shrivastava said – “All calls that will be made from BSNL network will be charged at per local call rate for next three days.”

The normal charge for a call to Nepal costs a consumer Rs 10/minute. Shrivastava said BSNL customers would be billed for calls made to Nepal as per the local call rates they had opted for themselves.