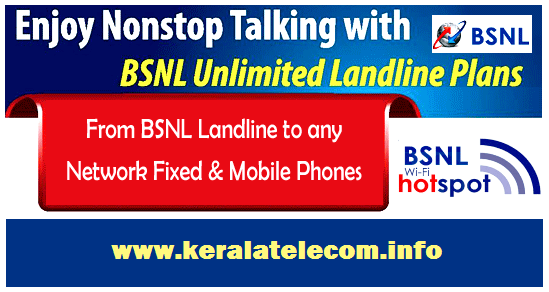 The scheme for unlimited free night calls, from 9 p.m. to 7 a.m., was announced at a press conference by Chief General Manager of BSNL Kerala – Shri.M.S.S. Rao, on 28th April 2015. Under the scheme, all major landline general plans in rural and urban areas, landline special plans as well as all combo (landline + broadband) plans are covered.
To know more details of BSNL’s Unlimited Free night Calls
<< Click Here >>

Shri. Rao also said that, BSNL is also planning to set up Public WiFi hotspots in 1,113 locations across Kerala Telecom circle. There will be 2731 Access Points where customers can access high speed wireless internet on their Mobile / Laptop / Tablet.

BSNL will be installing WiFi Access Points in Public Places like – Shopping Malls, Railway Stations, Bus Stations, Airports etc. In Trivandrum, BSNL plans to install 135 WiFi Hotspots with 585 Access Points. BSNL awarded the contract to setup and operate Public WiFi Services to US based Quadgen Wireless Solutions Private Limited.
Different Categories of BSNL Free WiFi hotspot Services
See other recent updates about BSNL WiFi Services below:
New landline phones can be subscribed by visiting the nearest BSNL service centre or by calling toll free number 1800 345 1500 or by sending SMS – LL or BB or LL+BB to 9400054141. The installation charges for new landline and broadband connection have been waived for a period of one month from May 1, 2015 in Kerala Circle. See it’s details below:

“We admit there have been some issues with our services, but we have been able to address most of these in the past few months. There has been congestion of the networks, which we have solved by switching to a more powerful platform. We have also acquired more IP addresses. The issue of shortage of SIM cards has also been solved,” Shri. Rao added.
BSNL still holds a monopoly in landlines in Kerala with 96.13 per cent market share, there has been some erosion in
its base of late. See it’s details below:

Next generation switches (NGN) are also being deployed in phased manner in Kerala Circle. This technology will provide fixed line and broadband from the same telephone exchange.
Dear readers, please share your views and opinions about these new attractive offers by BSNL via comments with us.
Share. Facebook Twitter WhatsApp Telegram
Previous ArticleExclusive: BSNL re-launches ‘SAMADHAAN’ Scheme for settlement of Excess Usage Bill Complaints of Broadband Customers
Next Article Exclusive: BSNL Kerala Circle to introduce Balance Based Tariff (BBT) for Prepaid Mobile Customers from 1st May 2015 onwards