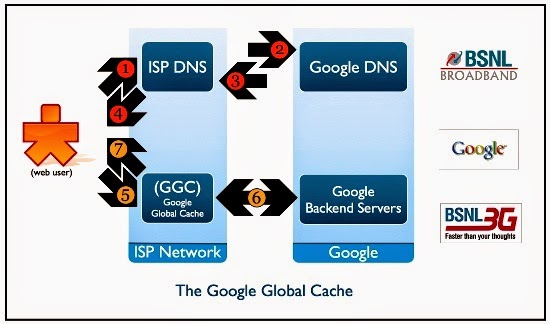 As per the information from reliable sources, Google is providing the servers for free to BSNL along with the software technology for caching while BSNL is bearing the expenses of place and physical installation of the servers including the air conditioning, electric supply, upstream connection and operating expense.

Significance of GGC Servers
Google Global Cache (GGC) represents the final tier of Google’s content delivery platform and acts as an intermediary between an internet user and Google’s data centre. With GGC, network operators and Internet Service Providers deploy a small number of Google servers inside their network to serve popular Google content, including YouTube. Google’s traffic management system directs users to the node that will provide the best performance for the user.

GGC can be located anywhere in an operator’s network to maximize savings in backbone and transit bandwidth. Targeted deployment can reduce the number of route miles travelled on an operator’s network to serve Google traffic through the cached content rather than having to be routed all the way to Google’s data centre, further increasing cost savings for the operator.

Since around 40% of the total internet traffic of BSNL is towards Google, hence installation of GGC servers in BSNL broadband network will provide a better browsing experience to the users and also reduce the congestion on BSNL’s network at various levels.

As of now there has been an agreement between BSNL and Google for setting up the GGC servers in 14 locations. The locations are given below:

The servers have been received by BSNL for 11 of these locations and the three servers for Lucknow, Patna and Kolkata are expected to be delivered by Google soon.


Dear readers, please share your views and opinions about this latest news via comments with us.  Whether this will improve the internet experience of Broadband customers of BSNL?
Share. Facebook Twitter WhatsApp Telegram
Previous ArticleExclusive: Government to shut down MTNL and 5 other loss making PSU’s ; BSNL Next ?
Next Article TRAI Report Card January 2015: BSNL leads in Wired Broadband Services with 9.98 Million Subscribers