By Tele Kerala (Chief Editor)September 21, 2014Updated:August 30, 2021No Comments2 Mins Read
Facebook Twitter WhatsApp Telegram
Share
Facebook Twitter WhatsApp Telegram
As per the
latest TRAI MNP performance chart, BSNL Kerala Circle gains Maximum
number of customers through Mobile Number Portability (MNP). According
to the Data given by the service providers, a total number of 126.72
million subscribers have submitted Mobile Number Portability requests to
the various operators as on the end of July 2014. 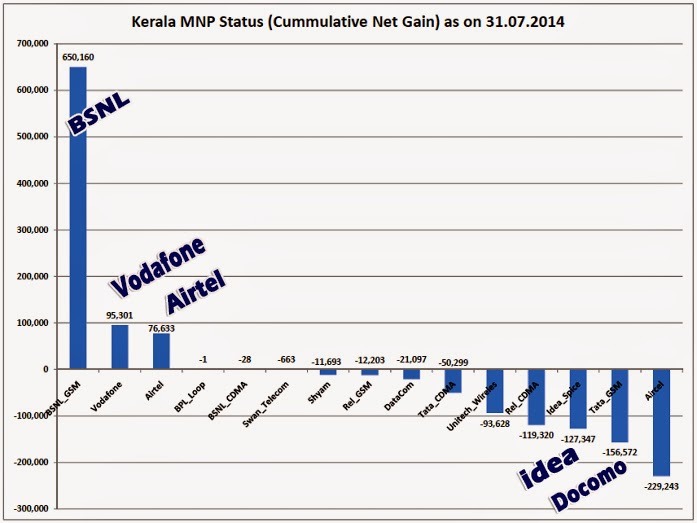 From
the above statistical diagram as on 31 July 2014, BSNL leads the race
with the net addition of 6,50,160 customers. All other private players
are far behind BSNL. Vodafone is at the second place with 95,301 net
additions whereas Bharti Airtel is just behind Vodafone with 76,633 net
additions. Idea cellular and Tata Docomo are severely impacted by the
performance of BSNL.
BSNL
Kerala Telecom Circle, is the most revenue generating circle in India.
In Kerala, BSNL has got the Largest Market Share as a telecom service
provider. BSNL is always maintaining the leading position in MNP
performance since MNP implemented in India. As per the current
statics (as on 20 September 2014), a total of 9,52,779 customers have
joined BSNL network through MNP while only 2,97,402 customers have left
BSNL and joined other operators.

As
per the latest TRAI MNP Performance chart as on 31 July 2014, in the
MNP Zone I, maximum requests have been initiated in the region of
Rajasthan(12.68million) which is followed by Gujarat (10.69 million). In
MNP Zone-II, the maximum number of porting requests was from
Karnataka(14.34 million) and is followed by Andhra Pradesh(11.83
million). Zone 1 consisting of Northern & Western India, Zone 2
consisting of the Southern & Eastern.

Dear
Readers, have you joined BSNL through MNP? What are the reasons for
this wonderful performance by BSNL in Kerala Telecom Circle? Whether
your current operator provide you the best and economical offers? Just
share the performance of your current cellular operator with us.
Share. Facebook Twitter WhatsApp Telegram
Previous ArticleExclusive: BSNL launches ‘ Speed Restoration Facility after FUP ‘ for Unlimited Broadband Customers
Next Article Exclusive: BSNL Launches Online Portal for the “E-Auction of Fancy and Vanity Mobile Numbers”